Sasha Velour’s theatrical drag spectacular “Smoke & Mirrors” is reborn and hitting the road again in 2022! It is announced today that the acclaimed one-queen show will return to Europe and the UK with 36 dates in 33 cities from January to March 2022, after its initial 17-city UK/EU run in 2020 was cut short due to the COVID-19 pandemic. As a global drag superstar, award-winning TV producer, and winner of RuPaul’s Drag Race Season 9, Sasha Velour continues to prove she’s “one of the greatest show creators of our time” (Express and Star).

Sasha Velour’s “Smoke & Mirrors” must be seen to be believed. At over 90 minutes, “Smoke & Mirrors” is a lip-synched autobiographical fantasy with captivating visuals and breathtaking surprises. Dreamed up and meticulously performed by Velour, every second of this iconic production remains heart-felt and unforgettable. The soundtrack spans from Judy Garland to Le Tigre, featurian Velourian classics like “So Emotional” (Whitney Houston) and “Cellophane” (Sia) Throughout, theatrical techniques are used to unmask deeper truths about gender, grief, fame, and community. This is a show dedicated to anyone who dares to live life “over the top!”

Sasha Velour says “The new ‘Smoke & Mirrors’ tour is gonna be everything and more! Lana’s out, Britney’s in…and we are going to Prague, bitches! This show always reminds me to celebrate rebirth and flexibility, so we took the surprised delays as an opportunity for growth. Can’t wait to share this with you!”

Sasha Velour’s “Smoke & Mirrors” is the biggest ever one-queen drag show of its kind, the first theatrical drag spectacular to integrate a full lip sync narrative and tour the world at this scale. Over the course of a year, it was seen by over 35,000 people in 30 cities across three continents, featuring sold out performances at iconic theaters in New York, LA, London, San Francisco, Chicago, Boston, Auckland, Toronto, Vancouver and more, and is now going on the road, visiting more than 33 cities across Europe. Hailed as “a spellbinding tour de force” (Forbes), “Smoke & Mirrors” has pushed the boundaries of what drag can be, incorporating Velour’s signature innovative use of video projection. 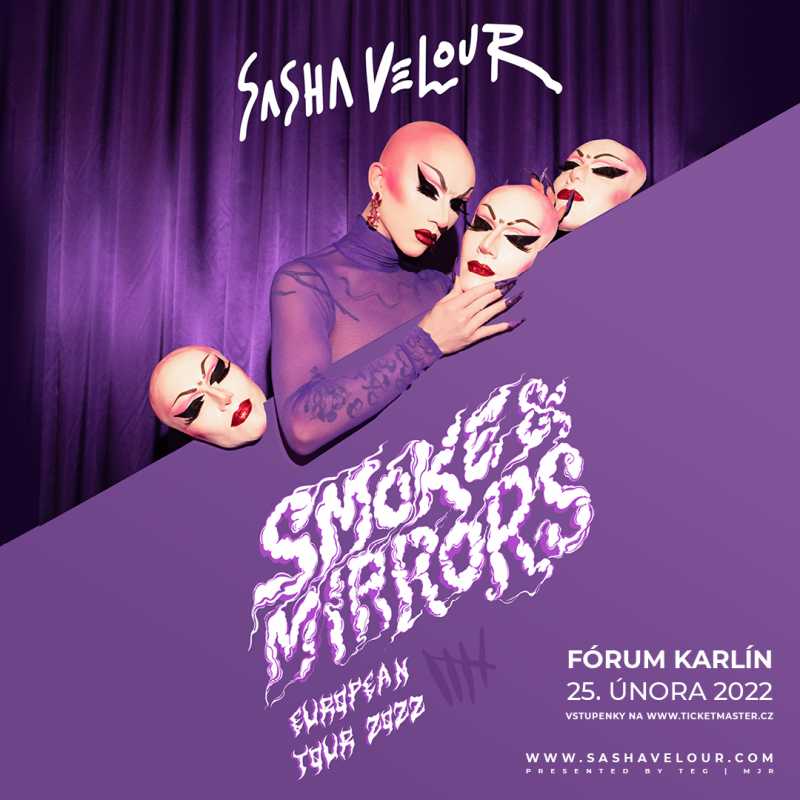