Obscure Promotion invites you to the Prague concert Gojira again! We first brought this band to Brutal Assault in 2006 and it was their premiere in the Czech Republic. Since then, these French have become a global metal phenomenon in recent years. The January deadline was ruined by covid, the new deadline for Prague is July 25!

Two Grammy nominations, countless awards, activism in the field of ecology, environment and human rights, as well as a band that has brought metal music in the Renaissance over the last decade. In January, the French quartet GOJIRA will come to Prague to present a new album “Fortitude” to Czech fans.

When the Duplantier brothers formed the band in 1996, it was hard for them to imagine a few years later ahead of the two biggest metal bands – the famous Metallica and Slayer, that they would be among the main stars of world festivals, or that they would be referred to as bands. which, at the end of the above, will take their position.

No wonder. GOJIRA has sounded distinctive since its inception. However, the turning point came in 2005, when five years after the millennium, the talented band carved the ideal form of modern-sounding metal music with their album “From Mars to Sirius”. Since then, the stable quartet, which has held together since 1998, has been talked about as metal heralds and revivalists who broke clichés in metal music, gave it a new guise and attracted a new fan base.

The recent news is called “Fortitude” and fans have been waiting for it for 5 years. The expectations were great, especially when the previous studio girl “Magma” was nominated for two Grammys. Although GOJIRA sticks to his typical weapons on the album, it never ceases to open up to new directions and, above all, deepens the overall emotional experience. And on top of that, it adds strong anthem. He also does not slow down in his fight for a better world, where he again sympathetically emphasizes nature protection, environmental issues and human rights. “Fortitude” is simply an event again, and the title of Billboard’s best-selling album at the time of release corresponds to that.

GOJIRA is also known to the Czech audience. The organizing agency Obscure Promotion brought them to the Czech Republic in 2006 for the Brutal Assault festival and it was their premiere in the Czech Republic. Since then, GOJIRA has performed here regularly. However, the epic novelty requires a full-fledged show, where everyone can get to the last album after the immediately sold-out Prague Lantern. Seeing the French on the stage is worth it. Not for their energetic show, but for recharging with their positive karma. It’s a band that never ceases to surprise, it’s a band that corrects the world for us – GOJIRA!

They will be accompanied by ALIEN WEAPONRY from New Zealand and EMPLOYED TO SERVE from England.

The concert is organized by the Obscure Promotion agency, tickets are available in the Ticketmaster network.

Purchased tickets remain valid for the new concert date. If you want to request a refund, do so in the Ticketmaster network, which is the only ticket seller, no later than January 31, 2022. Thank you for your understanding. 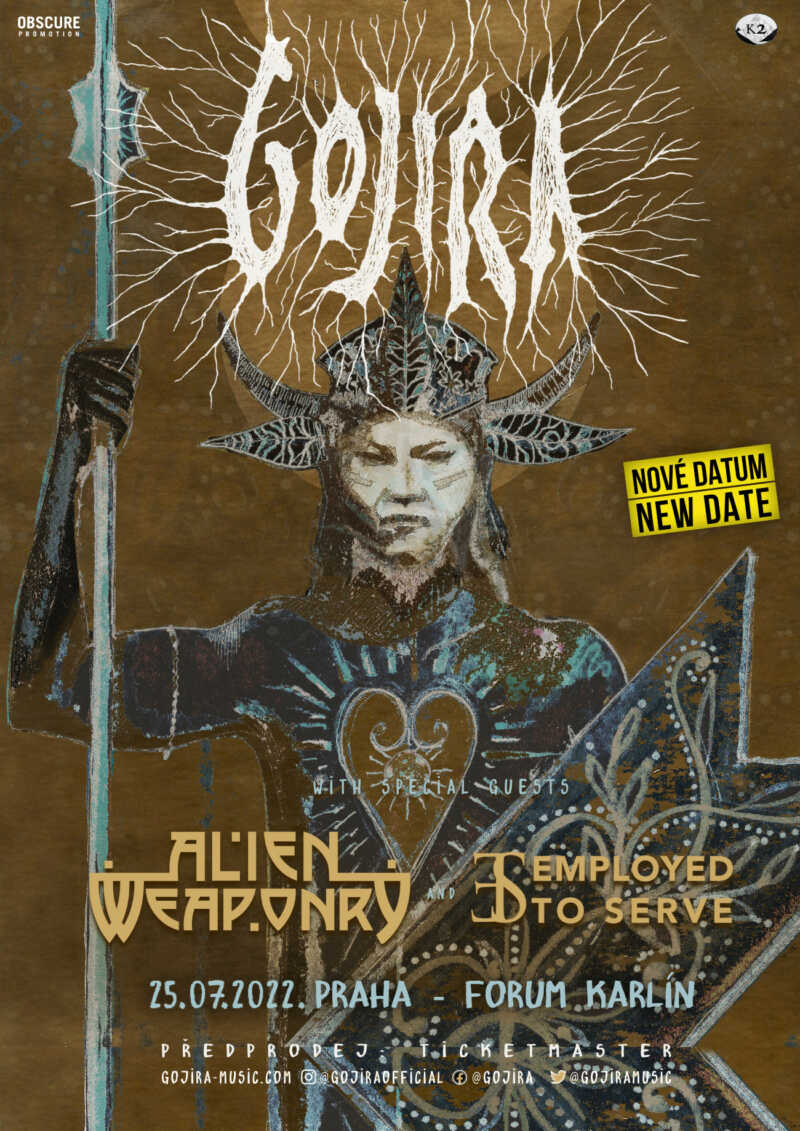